The St. Charles Public Library’s winter reading program returns for another year. Designed for adults and teens, the program encourages people to read and visit the library in the cold winter months.

Drop by the library to pick up a Book Bingo sheet. Each square has a different reading challenge to complete. Get a Bingo and earn a treat (for up to four Bingos). Get a Blackout and earn a $10 gift card to Cabin Coffee.

Every three books or audiobooks read earns an entry into the monthly drawing. Every month, the library will be giving away two coffee mugs filled with chocolate.

Every week, the library goat will pose for a photo somewhere in the local area. Treats will be given to those that correctly guess the location of the photo.

Drop by the St. Charles Public Library on Thursday, December 9, from 6-8pm, to create a fun craft for the holidays.  The activity is free and open to all ages.

In 2018, Danielle Leukam was assaulted in her own home in St. Charles.  Today, her mission is to raise awareness and help other survivors.

This is her story.

Danielle is the author of ‘Four Pounds of Pressure: A Memoir of Rape, Survival, and Taking Back My Power’ and the children’s book, ‘Fly Like a Girl.’

Danielle will visit the library to share her story, answer questions, and sign and sell copies of her books.

For more information on Danielle Leukam, check out her website at www.danielleleukam.com.

Nicole Czarnomski, author of ‘How Cancer Cured My Broken Soul,’ will visit the St. Charles Public Library on Wednesday, October 20, at 6pm.  Nicole will share details of her breast cancer journey and her quest to thrive in a challenging situation.

During the event, Czarnomski will read from her book, talk about journaling (which was the origin of her book), plus discuss briefly early detection and prevention of cancer.  Czarnomski will have books available for purchase for $15, plus supplemental journals for $10.

For more information on Nicole Czarnomski, check out her website at thewhisperingpen.com.

Looking for company while you craft?  Do you need a tip or two to complete this or that crochet stitch?  Need a sounding board for your creative project ideas?  Drop by the St. Charles Public Library anytime between 6-8pm on Thursdays, starting September 16. 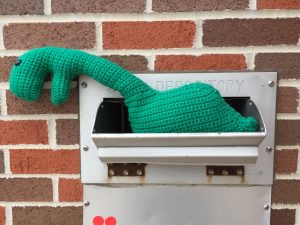 Where is Greeny the Reading Dinosaur this week? Come to the St. Charles Public Library and make your guess – correct guesses will earn you a prize.

This summer, Thursday nights are for the teens at the St. Charles Public Library.  From 6-8pm, the library will be offering different activities for teens to enjoy, such as board games, bingo, crafts, and more.

The teen activity nights will kickoff with an Open Mic Night on Thursday, June 3.  Come on down to the St. Charles Library to share your talent and enjoy the talents of others.

The St. Charles Public Library is also offering reading rewards for teens this summer in the form of Book Bingo.  Each square on the Bingo sheet will have a different reading challenge.  A Bingo will earn readers a small prize.  A blackout will earn readers a larger prize.

Every Tuesday evening in May, SELCO (Southeastern Libraries Cooperating) will be hosting a series of author talks over Zoom as part of the 2021 Minnesota Author Tour.  The program is possible due to support from the Minnesota Arts and Cultural Heritage Fund and the Minnesota Library Legacy Program.

The author tour will begin on Tuesday, May 4 at 6:30pm with a talk with Brian Freeman.  Brian Freeman is a New York Times bestselling author of psychological thrillers, including the Jonathan Stride and Frost Easton series.

Freeman has also been selected by the Robert Ludlum estate to take over Ludlum’s Jason Bourne series in a new book published in 2020.  Since 2005, Freeman has sold books in 46 countries and 22 languages. His stand-alone novel “Spilled Blood” won the award for Best Hardcover Novel in the International Thriller Writers Awards, and his novel “The Burying Place” was a finalist for the same award.  His thriller “The Night Bird” was one of the top 20 Kindle bestsellers of 2017, and his audiobook mystery “The Deep, Deep Snow” was a #1 Audible and Amazon Audio bestseller.

Freeman’s debut novel, “Immoral,” won the Macavity Award and was a finalist for the Edgar, Dagger, Anthony, and Barry awards for Best First Novel.  “Immoral” was also chosen as International Book of the Month by book clubs around the world.  His novels “The Bone House” and “Season of Fear” were both named finalists for the Audie Award for Best Audiobook in Thriller/Suspense.  He won the Minnesota Book Award for his novel “The Voice Inside” and has been a finalist for the award four other times.

Freeman’s writing has been praised by critics and bestselling authors alike, including Michael Connelly, Nelson DeMille, Jeffery Deaver, and Lisa Gardner. “A master of psychological suspense,” Gardner said of Freeman. London’s Daily Mail called Freeman “up there with Harlan Coben in the psychological crime stratosphere.” Freeman has lived in Minnesota with his wife, Marcia, for more than 30 years.

If you did not get a chance to try the breakout box during winter fest, we still have it. You can call and get a time until the 22nd.

BRING YOUR PROJECTS AND HAVE FUN. THURSDAY NIGHTS 6-8 STARTING JANUARY 9